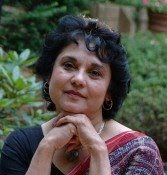 Born in India, Lalita Noronha earned her PhD in Microbiology and is research scientist, writer, poet and teacher at St. Paul’s School for Girls. Her work has been widely published (Baltimore Sun, Crab Orchard Review, Catholic Digest, The Christian Science Monitor, Get Well Wishes [Harper Collins] 2001: A Science Poetry Anthology [Anamnesis] among others). She is a recipient of the Maryland Literary Arts Award twice—(1997 and 2001) and a Maryland State Arts Council Individual Artist Award in 2002, City Paper, and the National League of American Pen Women. She is a fiction editor for The Baltimore Review and the author of a short story collection, Where Monsoons Cry from Black Words Press (http://www.lalitanoronha.com)

Rosalia Scalia writes both fiction and nonfiction. Her fiction appears in the North Atlantic Review, Pebble Lake Review, Pig Iron Press, and Spout Magazine. Her story “Sister Rafaele Heals the Sick” was nominated for a Pushcart Prize, and her story “Picking Cicoria” is the first prize winner in the 2007 Taproot Literary Fiction competition and is published in Taproot The Healing Tree #20. The first chapter of her novel-in-progress, Delia’s Concerto, was one of seven finalists in a National League of American Pen Women competition. Scalia earned a master’s degree in writing from Johns Hopkins University in 2003. Her nonfiction appears in a variety of publications and web sites; she has contributed to five nonfiction books published by the French Publisher, Editions du Signe.

Susan Muaddi Darraj is the author of The Inheritance of Exile, a collection of short stories published by University of Notre Dame Press in 2007 and a finalist for the AWP Book Awards in Short Fiction. She teaches English and literature at Harford Community College in Bel Air, MD, and is Senior Editor of The Baltimore Review, a journal of fiction, creative nonfiction, and poetry.
Posted by Jen at 2:22 PM