Sure, we took the summer off, but we want you to know that we missed you and that nothing has changed between us. The first episode of the Fall 510 is going to feature readers from Unsaid Magazine, one of the greatest literary magazines ever published. The September line-up features Michael Kimball, Kim Calder, Kate Wyer, and Andy Devine.

Michael Kimball’s third novel, DEAR EVERYBODY, is now in paperback in the US, UK, and Canada. The Believer calls it “a curatorial masterpiece.” Time Out New York calls the writing “stunning.” And the Los Angeles Times says the book is “funny and warm and sad and heartbreaking.” His first two novels are THE WAY THE FAMILY GOT AWAY (2000) and HOW MUCH OF US THERE WAS (2005). His three novels have been translated (or are being translated) into many languages. His work has been featured on NPR’s All Things Considered and in Vice, as well as The Guardian, Prairie Schooner, Post Road, Open City, Unsaid, and New York Tyrant. He is also responsible for Michael Kimball Writes Your Life Story (on a postcard)—and two documentary films, I WILL SMASH YOU (2009) and 60 WRITERS/60 PLACES (2010). 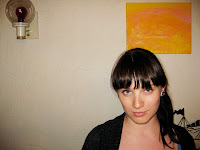 Kim Calder lives in Los Angeles, but keeps leaving to study creative writing and literature in other places. Currently, she is an MFA student at the University of Maryland.

Kate Wyer is a mental health interviewer for the public health system of Maryland. Her work has most recently been published in Unsaid, PANK and The Collagist. Wyer is the recipient of the Elisabeth Woodworth Reese award. FENCE magazine granted her a fellowship to attend the Summer Literary Seminars in Lithuania. She heads the collaborative book project And, Afterward. Wyer supports the Understanding Campaign.

Andy Devine’s alphabetical fiction and essays have appeared in a variety of literary magazines, including New York Tyrant, Unsaid, elimae, Everyday Genius, and Taint. In 2002, Devine was awarded the Riddley Walker Prize (for a work that ignores conventional rules of grammar and punctuation). In 2007, he published his first chapbook, “As Day Same That the the Was Year” (Publishing Genius). In 2009, Devine was awarded The Ivory-Billed Woodpecker Award (for fiction in the face of adversity). WORDS (2010, Publishing Genius) is his first book. Andy Devine Avenue — in Flagstaff, Arizona — is named after him.
Posted by Michael Kimball at 3:23 AM