Its Episode Two of Season Four: Jessica Anya Blau, Nik Korpon, Pat King, and Tara Laskowski. It's difficult to think about this much good writing (and reading) happening all in one place at one time, Saturday, February 19th, at 5pm, at Minas.

Jessica Anya Blau's first novel, THE SUMMER OF NAKED SWIM PARTIES, was chosen as a Best Summer Read by the Today Show, the New York Post, and New York Magazine. Barnes and Noble, The San Francisco Chronicle, and other major newspapers chose it as one of the Best Books of the Year. Jessica's second book, DRINKING CLOSER TO HOME, pubs today, January 18th. Currently, Jessica is teaching at Goucher College in Maryland. 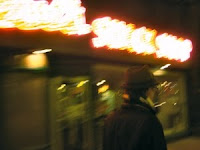 Nik Korpon is the author of Stay God, a noir novel set in Baltimore. His stories have ruined the reputation of Out of the Gutter, 3:AM, Cherry Bleeds, Everyday Genius, Sex and Murder, TripleQuick!, Do Some Damage, and a bunch more. He co-hosts the reading series Last Sunday, Last Rites and his noir novella Old Ghosts will be out in March. Give him some danger, little stranger, at www.nikkorpon.com

Pat King was born in Texas but has only been there twice. His autobiographical novel, Exit Nothing, is close to completion. Recently, he's been writing about movies and television for the pop culture website Cin City 2000 (www.cincity2000.com). Along with Nik Korpon, he co-hosts the Baltimore reading series, Last Sunday, Last Rites.

Tara Laskowski was the 2009 Kathy Fish Fellow and writer-in-residence at SmokeLong Quarterly, and is now a senior editor there. She won the 2010 literary awards series from the Santa Fe Writers Project. Her story, "Ode to the Double-Crossed Lackey in 'Thunderball'" was nominated for Dzanc's Best of the Web series for 2009. Her short stories "They" and "Like Everyone Else" were recognized by storySouth as noteable online stories in 2004 and 2009. Another story, "Hole to China," was nominated for a Pushcart Prize. She currently lives in a suburb of Washington, D.C. with her husband Art Taylor.
Posted by Michael Kimball at 3:51 PM

Michael, I really like the new layout. Muy Bonita! I am excited to see that there will be a 510 session during Citylit. I plan to be there, perhaps we can find a minute or two before or after to meet?