Dylan Landis is the author of Normal People Don't Live Like This (Persea), a debut novel-in-stories that has won praise from Vanity Fair, More, and Booklist. Her fiction has appeared in Bomb, Tin House and Best American Nonrequired Reading, and she has won the Poets & Writers California Exchange Award and an NEA-funded Fellowship from the Virginia Center for the Creative Arts. Normal People was a finalist for the Grace Paley Prize for Short Fiction.

Sherrie Flick’s debut novel Reconsidering Happiness is just out with University of Nebraska Press. I Call This Flirting, her awarding-winning chapbook of flash fiction, was published in 2004 (Flume Press). Her work appears in the anthologies Flash Fiction Forward (Norton) and New Sudden Fiction (Norton) as well as You Have Time For This (Ooligan Press). A recipient of a PA Council on the Arts grant, she lives in Pittsburgh where she works as a freelance writer and directs the Gist Street Reading Series. www.sherrieflick.com 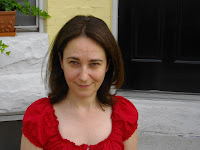 Originally from Toronto, Elise Levine was named by Margaret Atwood as one of Canada’s most important emerging women writers. Reviewers have called Levine “a cutting-edge literary sensation” and “one of Canada’s finest fiction writers … a sensitive, cagey dominatrix of literary form and human psychology.” She is the author of the story collection Driving Men Mad and the novel Requests and Dedications. Her poems, fiction and creative nonfiction have appeared or are forthcoming in numerous periodicals including Hotel Amerika, Gargoyle, Prairie Schooner, Best Canadian Stories, the Journey Prize Anthology, and Canada’s The National Post. She is the recipient of a Canadian National Magazine Award for Fiction, and many awards including ones from the Canada Council for the Arts, the Ontario Arts Council, and the Toronto Arts Council, as well as residency fellowships from, among others, the McDowell Colony and Yaddo, where she was an Eli Cantor Fellow. She currently resides in Baltimore, where she teaches creative writing at Towson University and the University of Maryland, Baltimore County.
Posted by Michael Kimball at 1:26 AM