Josh Weil is the author of the novella collection The New Valley (Grove, 2009), a New York Times Editors Choice selection for which he was honored with a “5 Under 35” National Book Award. His fiction has been published or is forthcoming in Granta, American Short Fiction, Narrative, and Glimmer Train, among other journals; he has written non-fiction for The New York Times, Granta Online, and Poets & Writers. Since earning his MFA from Columbia University, he has received a Fulbright grant, a Writer’s Center Emerging Writer Fellowship, the Dana Award in Portfolio, and fellowships from the Bread Loaf and Sewanee Writers’ Conferences. As the 2009 Tickner Fellow, he is the writer-in-residence at Gilman School in Baltimore, where he is at work on a novel.

Laura van den Berg was raised in Florida and earned her MFA at Emerson College. She is the recipient of scholarships from the Bread Loaf and Sewanee Writers’ Conferences, the 2009 Julia Peterkin Award, and the 2009-2010 Emerging Writer Lectureship at Gettysburg College. Her fiction has appeared in One Story, Boston Review, American Short Fiction, Best American Nonrequired Reading 2008, Best New American Voices 2010, and The Pushcart Prize XXIV: Best of the Small Presses, among others. Laura’s first collection of stories, What the World Will Look Like When All the Water Leaves Us (Dzanc Books, October 2009), is the winner of the Dzanc Prize and was recently selected by Barnes & Noble for their "Discover Great New Writers" Program. To learn more about Laura, please visit www.lauravandenberg.com. 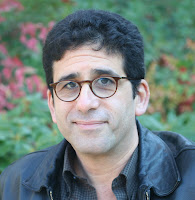 Geoffrey Becker’s new book of stories, Black Elvis (University of Georgia Press, October, 2009), won the 2008 Flannery O’Connor Prize for Short Fiction. His novel, Hot Springs, is forthcoming from Tin House books. He is the author of two previous books, Dangerous Men, a collection that won the Drue Heinz Prize, and Bluestown, a novel. His other awards and honors include an NEA fellowship, selection for the Best American Short Stories anthology, the Nelson Algren Award from The Chicago Tribune, and the Parthenon Prize. He teaches writing at Towson University in Maryland, where he also directs the graduate program in Professional Writing.
Posted by Michael Kimball at 2:15 PM